As per UN, The global population aged 60 years or over with an estimated of 962 million in year 2017, It is more than twice as large as in 1980 when there were 382 million older persons worldwide. The older population of the developing regions is growing much faster than in the developed regions. The number is expected to double again by 2050, and it is projected to reach nearly 2.1 billion old age people. Over the coming decades, the number of older persons is expected to grow fastest in Africa, where the population aged 60 or over is projected to increase Africa has 68.7 millions, 549 Million in Asia, 183 million in Europe, 78 and 76 million in North and Latin America. Japan population is shrinking due to low fertility rates and society and cultural infrastructure, the aging population is rapidly increasing and Tokyo is the most populous city in the world, Taiwan, is another with low birth rates. 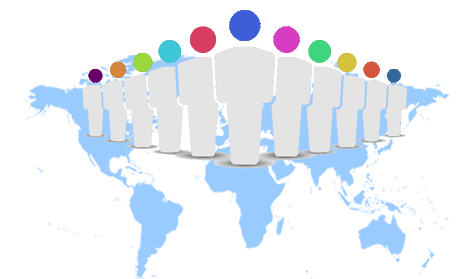 The chart listed the population milestones from 1804 from the 1 Billion range. The United Nations did predict the world population by the year 2100 after another 80 years will be 10 Billion considering as medium variant, If high variant is considered then the population will raise to 15 Billion and 6.2 Billion for a lower variant which is lower than the population of today.

What was the population in 10,000 BC?
200 years ago there were less than one billion humans living on earth. Today, according to UN calculations there are over 7 billion and projected in 2100 it will be around 11 billion with the growth rate of 2.1. At 1 BC the the population expected to be 188 Million, and at 10000 BC the expected population to be 2.4 million as per Oxford researcher.

World Population by Regions in millions in 2017

African Continent has a population of 1 Billion as estimated on 2017, With the annual rate of 2.7 compared to more developed regions, Eastern europe and central asia(0.9), Arab states or Middle east region has a population of 359 million and growing quickly with annual average rate of 2.1 when compared to Africa, the rate of change is 1.5 times more than the world annual rate of 1.2. Rapid population growth keeps poor countries poor, this may happen to some of the African Nations and Asian countries due to weaker policies, on the other side it may be reverse for Arab States as they may get much richer by having a good annual rate.

World Population & Fertility rate by Countries in millions in 2017 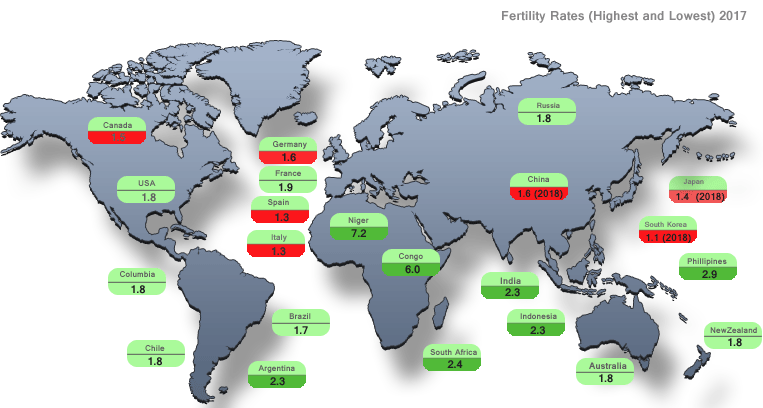 South Korea has the lowest world fertility rate with 1.1 by 2018, followed by Japan with 1.4, Spain and Italy with 1.3 each. China is ranking 1 in terms of population by 2019 with 1.41 billion people but the population rate is declining to 1.6 due to rapid population control from 1980 to 2000, Guangdong and Shandong provinces are with 109 and 100 million people, Shanghai and Beijing are the highest populated cities with 24 and 23 million, and rank 2 is india with 1.36 billion with 2.3 fertility rate and will surpass China in 2026. Indian States like Uttar Pradesh and Maharastra are with 228 and 120 million. Highest populated cities in Delhi and Mumbai including metropolitan area with 18.8 and 20 million.It is believed that somewhere around 300,000 years before homo sapiens arrived from Africa to Tamil Nadu region which is southern part of India bordered with Karnataka. One of the oldest civilizations of India is Indus Valley Civilisation around 5500 BC, is currently part of Punjab, Bihar Rajasthan and Gujarat Region. Bengali is the widely spoken language of 91 million people in India in West Bengal and Assam after Hindi language with 550 million people, Madhya Pradesh state alone has 64 million hindi speakers, and Telugu is the third most speakers with 85 million in Andhra Pradesh and Telangana. On 5th August 2019, India passed the resolution of forming 2 Union Territories, Ladakh and Jammu and Kashmir for the northern part of India.
Slavery in America started in the year of 1619, when 20 Africans were brought to Virginia in a dutch ship. The Slavery was finally abolished on the 13th Amendment to the US Constitution on January 31, 1865. Illinois was the first state to give formal consent to the 13th amendment to abolish slavery. But before that five of the northern states who are self declared adopted policies to abolish slavery, Pennsylvania in 1780, New Hampshire and Massachusetts in 1783, and Connecticut and Rhode Island in 1784. Ohio state has over 40,000 miles of waterways. The largest states of United States are Alaska, Texas, California, Montana and New Mexico. New York State is the fourth largest state and some of the world's popular theme parks, including Disney World, Universal Studios, and SeaWorld are in Florida State. The Wright brothers, had their first successful flight in North Carolina, a state is named in honor of King Charles I of England, North and South Carolina were one colony until 1729. The name Michigan is derived from the Ojibwa Indian word 'meicigama' means 'large water', a state is known for its great lakes. New Jersey was named after the Isle of Jersey, an Island in the English Channel. Arizona is known for the famous Grand Canyon and desert. Washington is the second most populous state on the West Coast and in the Western United States, Virginia is the oldest state and one of the original 13 colonies at the time of European revolution, also the state Massachusetts, which was named after the native tribe, also its best state for higher education. Tennessee was named after a Indian Cherokee town 'Tanasi' and the state of Indiana was named after Native Indians, Missouri was named after Natives of Sioux tribe. Alabama settled by the Choctaw, the Creek, Cherokee, and the Chickasaw. Maryland is called little America, because it has all type of terrains like mountains, beaches, sand dunes, farmland and forest similar to Colorado. People first arrived in the area now called Louisiana around 12,000 years ago. The state Wisconsin was first inhabited by various Native American tribes like Chippewa, Menominee, Oneida, Potawatomi and Ho Chunk. Minnesota has 11,842 lakes of 10 acres or more. One of the world's great invention of electric light bulb in 1883 by Thomas Edison was from Louisville, Kentucky state.

How the Women Population is treated in this world

The global rankings on women's inclusion, justice, and security offer multiple insights. As per GIWPS 2017-2018 report[3] of 153 countries Average women index of having equality is 0.68 compared to men and top 5 countries on earth are Iceland(1), Norway(2), Switzerland(3), Slovenia(4) and Spain(5) and 5 countries with poor equality status for women are Afghanistan(153), Syria(152), Yemen(151), Pakistan(150) and Central African Republic(149). In terms of mean years of schooling Germany has the average of 14 years, followed by United States and Canada with 13.5 years. Burkina Faso, Mali, Burundi, Ethiopia are the lowest with 1.3 to 2 years. 62 million girls around the world are denied an education, which often dooms them to a life of poverty and dependence(globalcitizen.org).
One way to empower women around the world is to help them gain land rights. According to landesa.org, Only 30% of the world's population own land titles, and women are often the least likely to have land registered. More than 400 million women farm, yet only about 15% of farmland is owned by women. Finland, Denmark and Norway has 100% Financial inclusion(Percentage of women ages 15 and older who report having an individual or joint account) where top 5 countries having the poor standard of financial inclusion are Turkmenistan(1.5%), Yemen(1.6%), Niger(2.5%), Pakistan(3%) and Central African Republic(3.4). Countries of Women are using 100% cellphone(Percentage of women ages 15 years and older who report having a mobile phone that they use to make and receive personal calls) are United Arab Emirates, Libya and Finland. Cuba has one of the least with only 7.6%, and Syria, Sudan, Pakistan and Burundi has less than 35% use of cellphone. Rwanda and Bolivia has 50% In terms of Parliamentary representation(Percentage of seats held by women in lower and upper houses of national parliament) where Qatar and Yemen has no women represents for parliament, Thailand, Lebanon and Haiti has less than 5% representation and United States is less than 20% of women for Parliament.
In the justice dimension, legal discrimination is extensive in the worst-scoring countries in all regions. Legal discrimination index (Aggregate score for laws and regulations that limit women’s ability to participate in society and the economy or that differentiate between men and women) United Kingdom, Spain, Mexico, Bosia & Malta has the best legal discriminate laws and index is 8, where as most notable are Saudi Arabia index is 54, one of the most gender-unequal countries on Earth, followed by Yemen, UAE, Syria, Oman, Jordan, Afghanistan and Iran with 45 to 48. Best score is 7, Global average is 23 and worst is 54.
Son bias is preference for boys reflects serious discrimination against girls and women, China(1.16), Azerbaijan and Armenia has high ratio, followed by Vietnam(1.12), India(1.109), Georgia(1.106), Pakistan(1.087) and Maldives(1.10). Son bias is the discrimination against girls and women, In an influential 1990 article, Amartya Sen examined the high ratios of men to women in several countries and estimated that more than 100 million women were “missing” worldwide, these numbers tell us, quietly, a terrible story of inequality and neglect leading to the excess mortality of women. Best score is 1.02, Global average is 1.08 and worst score is 1.16.

Religion is often said that its a belief and worship or a cultural system, But its the non-removal dress you wear to your mind without knowledge from your birth. The older religions on earth are As per the pew research center in 2015[4], Christianity is the largest religion with 31% with 2.3 billion world Christian population, followed by Muslims make the second largest religion with 1.8 billion world Muslim population around 24%, followed by 15% of world hindus population and Buddhists are 7%, remaining 23% belongs to other groups like Jains, Jews and members of other religions represent smaller shares. As per the report European Christians percentage is decreasing rapidly due to lower fertility rate and Muslims are growing faster and will be largest religion by 2060. The fertility rates among religions are Muslims with 2.9, Christians with 2.6, Hindus with 2.3, Buddhists with 1.6 and Folk and all other religions with 1.8 to 2.4. Regarding the youngest median age world population Muslims with 24 years, followed by Hindus with 27 years and world population Christianity with 30 years age.

Today, the fastest population growth is found on the planet from 1900 onwards where poverty is worst. Between 1900 and 2000, as the world's population was exploding, per capita income grew quicker than before 1900, Many of the countries income was rising and for individual nearly fivefold. But it's not clear that population growth is the key problem of many countries where many of the governments are lacking to provide skills and create work. Approximately 5 Billion population are living under low standards of income levels out of which 1 Billion people are living by poor income levels as estimated on 2011, Another 3.9 Billion living under Low income levels.

The threshold levels are determinded by Worldbank in 2019[2].Total 1.2 Billion world population are living with Good income of upper and high levels. Other 1 Billion with middle income levels. The current thresholds for 2019 updated by world bank are Low income with less than 995 dollars a year and up to 995 -3,895 dollars for middle-income and 3,896 - 12,055 for upper-middle income and greater than 12000 dollars for High Income Group[1].